What do I have to do to get you to notice me?

“What do I have to do to get you to notice me?”

That’s the question Lancashire Constabulary is asking motorists on behalf of bikers in a campaign aimed at making road users more aware of motorcyclists.

Over the last five years, motorcyclists have accounted for eight per cent of all casualties and 22 per cent of those killed and seriously injured on the roads. Many of these collisions occur because a driver doesn’t take the time to look out for a biker and just doesn’t notice them.

Billboards and posters have been produced showing a road policing officer naked on a bike and an officer on a bike dressed as a clown. This campaign has been developed to educate other road users on the importance of being aware of motorcyclists. The concept for this campaign is ‘What do I have to do to get you to notice me?’ It aims to increase awareness amongst road users of the need to be aware bikers when driving.

Motorcycles account for 1% of road users nationally, yet in Lancashire accounted for 25% of our killed or seriously injured road traffic collision statistics between April 2013 and March 2014. Around 30% of those being single vehicle accidents. Many of the collisions could have been avoided if only the motorists had been aware of bikers. 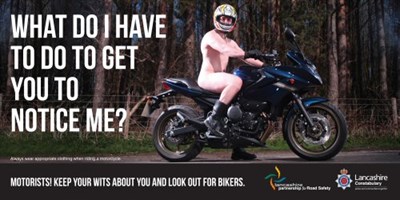 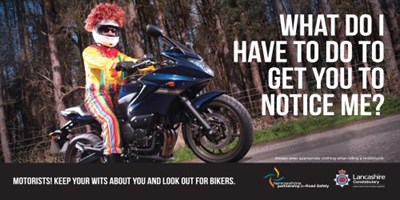 We work closely with motorcyclists and biking organisations to offer them safety advice and help keep them safe on our roads. Other road users have a huge role to play too – you must make sure you are mindful of the increase in motorbikes on our roads at this time of year, be aware of their vulnerability and take extra time to make your observations.

County Councillor John Fillis, Lancashire County Council Cabinet Member for Highways and Transport, said: "Working together with the police through The Lancashire Partnership for Road Safety we have been successful in reducing casualties on Lancashire's roads across the board, but deaths and serious injuries amongst motorcyclists remain a concern.

"The evidence suggests a substantial proportion of accidents involving motorcyclists happen because another driver has made a manoeuvre without seeing them.

"As a motorcyclist I have been involved in some very close misses with cars especially when they have been distracted by mobile phones or appear to be in a hurry and jump out of side roads. I always wear high visibility clothing which I believe has saved me a number of times from being in an accident.

"This campaign is vital to remind drivers to 'think bike' and to ask motorcyclists to consider whether there's more they could do to make themselves visible and therefore safer." 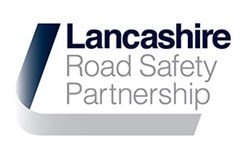