We have launched a campaign to raise awareness amongst students about rape and sexual assault.

In the hope that students have now begun to settle in to university life following the fresher’s and welcome weeks activities, the campaign has been launched in the run up to the festive season to encourage people to take a step back and think about how they can look after themselves and their friends on nights out and to drive home the message that sex without consent is rape.

Figures from 2016 showed that in Lancashire, 26% of all rape offences reported, the victims are young adults of student age, between 16- 25.

The most common age group for offenders/suspects was also identified in 2016 as 16 – 24 years of age making up 33% of all recent offences reported to us.

2016 figures also show that what is classed as ‘acquaintance rape’ accounts for 38% of all rape crimes in Lancashire and in 18% of those cases the victim and offender had only met the same day or night. 73% of these ‘same day’ offences also involved alcohol in some way.

To help spread the message, posters will be circulated around university campuses and surrounding areas and will be supported by local social media activity in the hope that we will reach as many students as possible.

Superintendent Ian Whitehead, Head of Public Protection, said: "Rape is a devastating crime which has a profound effect on victims and their families.

“We deal with reports of rape across the county every day; and while there are many myths surrounding rape and sexual assault, this crime is rarely committed by a complete stranger.

“The majority of cases we deal with involve offences committed by someone known to the victim, whether they have met that day or have known each other for longer.

“Rape investigation is a complex process – but no matter what the circumstances, sex without consent - is rape.

“I welcome this positive campaign which speaks directly to both potential victims and potential offenders, encouraging them not only to think about their own responsibilities but also challenge the behaviour of others.”

The campaign also aims to highlight that earlier reporting increases the chances of offenders being traced, increasing the confidence of anyone who believes they have been the victim of a crime.

Lancashire's Police and Crime Commissioner, Clive Grunshaw, said; "This campaign helps make those affected by rape aware of the specialist support there is available through Lancashire Victim Services. We don't want to see anyone become a victim of crime, but it is crucial that services are there to support those who unfortunately do. "It is also important that victims of rape feel confident in reporting the crime to the police, and can be confident that they will be treated with the utmost sensitivity and respect throughout the investigation. "I established Lancashire Victim Services to ensure that all victims of crime can access the support they need, whenever they need it. Specialist support for anyone affected by rape is available now and it is completely confidential."

There are a number of options available to report a rape or sexual offence:

No matter what the circumstances, sexual activity against your will is a crime. Police and charities are here to help and support you. To report a rape or sexual offence to us, ring 101 or use 999 if you feel you are in immediate danger.

If you feel unable to report it to the police straight away, tell someone you trust. You can speak to your GP or you can also self-refer to the SAFE Centre, a specialist unit at Preston Royal Hospital. They can offer counselling and support and can be contacted on 01772 523344.

If you have been a victim of crime, whether recently or in the past, Lancashire Victim Services are also here to help. They provide emotional support, information and practical help, regardless of whether you have reported the crime to the police. All their services are free and confidential - call 0300 323 0085.

For more information about rape and sexual assault, visit www.lancashire.police.uk/help-advice/personal-safety/rape-and-sexual-assault 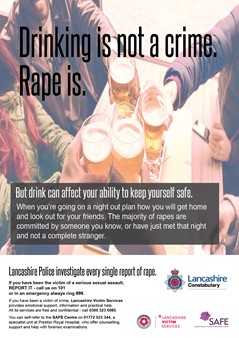 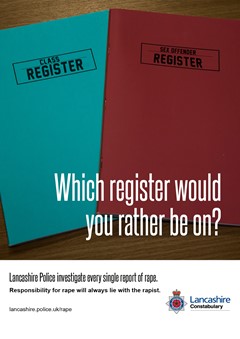 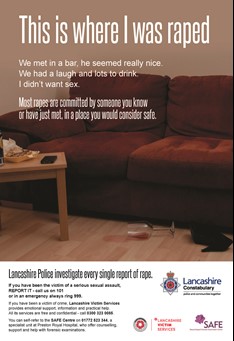