New Town Centre Police Operating base opens to the Public 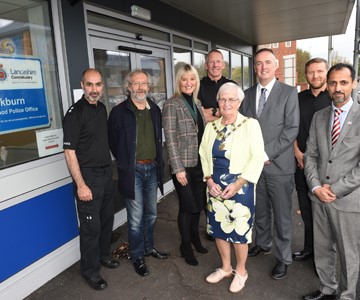 A new Local Police Operating base located in the heart of Blackburn Town Centre has opened to the public.

The new base was officially opened by Lancashire Police and Crime Commissioner Clive Grunshaw and Chief Constable Andy Rhodes on Wednesday 25th October.

It replaces the old Railway Station police office which was out dated and no longer fit for modern policing requirements.

The operating base will provide more effective services including, a front counter for the public as well as a modern briefing base for neighbourhood officers, office space for police and partner agencies, and two interview rooms.

Blackburn Neighbourhood Inspector Abid Khan said: “The new premises are in an excellent central location for the public, right next to the new bus station and shopping centre. They are also more fit for purpose for our officers who were previously based across a number of locations in Blackburn.

“Having everyone together in one new central building will improve the sharing of information and ensure officers go off to work in their own individual neighbourhood areas more fully briefed.  Our officers will be more visible across Blackburn as they travel between the new base and their area, on foot and using public transport.”

"Despite the continuing cuts to our budget by Government, I'm pleased that we have been able to invest in a new facility in the town centre, which reinforces our commitment to protect frontline policing, one of the key priorities in my Police and Crime Plan.

"This approach will save money in the long run, and delivers a new operating base which will improve the effectiveness of local officers, making Blackburn a safer place.

Leader of Blackburn with Darwen Borough Council, Councillor Mohammed Khan, said: “I’m pleased that residents will continue to have a central police station where they can easily access the Constabulary in Blackburn town centre. This should also be beneficial to policing of local neighbourhoods which as a result of better knowledge sharing and team working between the stations.”

The new front counter will be open to the public from 9am until 8pm, closed on bank holidays.

Residents can also contact police in a range of other ways, including:

Residents can also keep up to date on local policing by following their local teams on social media or by signing up to a free messaging service called In the Know which allows them to receive information about crime prevention and local incidents via email or text. To sign up people can visit www.stayintheknow.co.uk