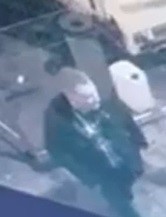 We’d like to speak to him after a doorman was assaulted outside a Chorley nightclub.

At 10.30pm on Friday December 8th 2017, a scuffle broke out between a group of men who had been ejected from Lost bar in Fazackerley Street.

During the fight, a man picked up a metal bar from a queue barrier and struck the doorman hard to his face, causing a large cut to his upper lip which will leave a permanent scar.

Since the attack we have conducted a number of enquiries but have been unable to identify the man responsible.

We would now like to speak to the man in the CCTV in connection with the investigation.

PC Tom Roberts, of Lancashire Constabulary's South Division, said: “This attack has left a doorman with a nasty injury while he was simply doing his job to keep people safe as they enjoyed a night out.

“On the evening of the attack there were several Christmas parties which may help to jog people’s memories.

“We would ask anyone who was out in Chorley on December 8th to cast their mind back and look at the picture.”

The man is described as white, approximately 5ft 7ins tall, with short, light brown hair, and in his mid-forties. He was wearing a checked shirt, a dark jacket and dark trousers