A Police Officer has been jailed for two years after he was convicted of Misconduct in Public Office.

Ihsan Ali, 40, of Bacup, was a response officer based in East Division. He abused his position as a police officer by pursuing sexual relationships with several females he was dealing with as vulnerable victims of crime.

He was found guilty today (Tuesday, February 6th) after a trial at Preston Crown Court of four counts of misconduct and sentenced to two years for each count, to run concurrently.

Concerns were raised about Ali in October 2016 and an investigation began by Lancashire Constabulary’s Professional Standards Department. He was arrested in April 2017 and immediately suspended from duty.

He will now face disciplinary proceedings.

Lancashire’s Deputy Chief Constable Sunita Gamblin said: “Firstly I would like to thank and commend the victims in this case for having the bravery to come forward and report these allegations to us. Today’s outcome would not have been possible without them.

“Ali used his position to target women he knew were vulnerable and contacted them with the sole motive of trying to establish a sexual relationship with them.

“The public expect and deserve the Police Service to be professional and focussed on keeping people safe, especially those who are most vulnerable. Here is an example of an officer who has overwhelmingly breached the position of trust placed upon him. He has totally undermined the Police Service and the excellent work the vast majority of officers and staff do every day.

“The abuse of position for a sexual purpose is defined by the Independent Office of Police Conduct as serious corruption and there is absolutely no place for such people in Lancashire Constabulary. We are committed to identifying, exposing and removing those who seek to exploit vulnerable members of our community and will continue to pursue criminal charges where appropriate.” 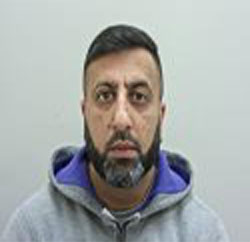