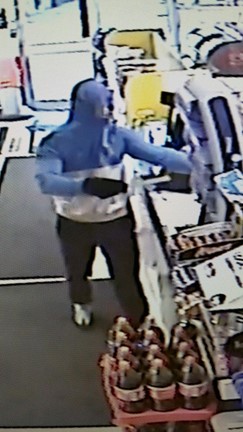 Police are appealing for witnesses following a robbery in Burnley.

We were called shortly after 6:30pm on Sunday June 10th to reports of the incident at Singh’s convenience store on Coal Clough Lane.

An unknown offender entered the shop brandishing a large knife. He made demands for money and made violent threats towards the lone shop worker.

The male offender, who is described as being between 5ft5in and 5ft9in tall and of slim build, made off with just a £10 note.

He possibly left the shop in the direction of Queensbury Road or carried on up Coal Clough Lane.

Police have now released CCTV footage and are appealing to anyone who recognises the man in the picture to come forward immediately.

PC Mohammed Bhai of Burnley Police, said: “Do you know who this man is? We’re urging anyone with any information at all to speak to us.

“This has been a cowardly unprovoked attack on a local business. Luckily nobody was harmed, and the offender only made off with a small amount of money, but this must have been a terrifying experience.

“I appreciate the CCTV isn’t that clear, but the man is wearing quite a distinctive blue and grey hoodie which someone may recognise or remember seeing on that day.”