Can you help identify this man? 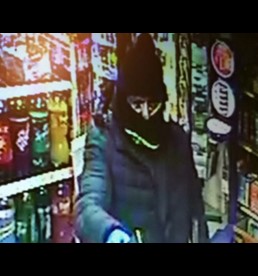 Can you help identify this man?

We’d like to speak to him after an attempted robbery at Reddy’s off licence in St George’s Road, Preston.

At around 7.45pm on Sunday March 18th, a man entered the shop carrying a meat cleaver and demanded money.

The shopkeeper pressed the panic button, sounding the alarm, and the man left empty handed.

He is described as having a young man’s voice, and was wearing a black bubble jacket, grey jogging bottoms and trainers.

His face was covered with a black scarf with a high vis trim and he was wearing medical use blue gloves.

Det Con Dan Armstrong, of Preston CID, said: “This was an extremely frightening incident for the shopkeeper and his wife, who have run the shop for 37 years.

“Although the robbery was unsuccessful, the couple have been extremely shaken by their ordeal.”