DETECTIVES have released CCTV of a man they want to trace after the violent robbery of an elderly woman in Blackpool.

The 89 year old victim was walking home from the Post Office on Whitegate Drive at about 4pm on February 24th when she was approached by a man on Dutton Road. The attacker grabbed her handbag and pulled it away from her resulting in her falling to the ground. He then ran off. The victim was found by a member of the public and taken by ambulance to Blackpool Victoria Hospital where she was treated for a broken hip caused by the fall.

Police enquiries have now recovered the CCTV images below. 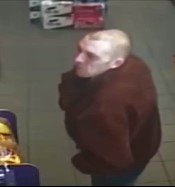 The man in the images is white, aged in his late thirties/early forties. He has a medium build and a shaven head with a distinctive hairline. He can be seen wearing a dark orange/red jacket and blue jeans. He is wearing a dark beanie hat with a light coloured strip and carrying a dark coloured rucksack.

Detective Constable Colin Adams, of Blackpool CID, said: “This was a callous robbery on an elderly lady which has left her with a very serious injury. I would appeal for anyone who recognises the man in these images to come forward and contact us so that we can trace him.”

Anyone with information should contact police on 101 quoting log number 1074 of February 24th or Independent charity Crimestoppers on 0800 555 111.