‘Carlos’ drugs gang sentenced to almost a century in jail 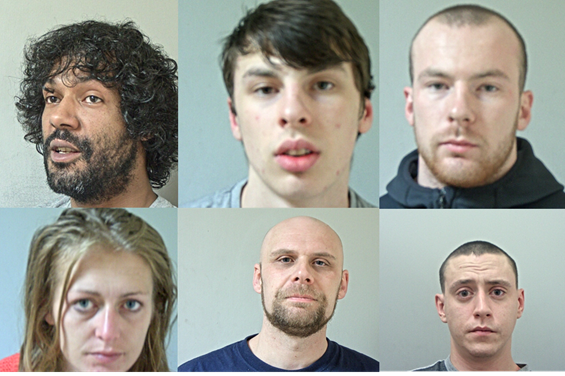 Members of a Blackpool gang which infiltrated the seaside resort with Class A drugs have been sentenced to almost a century in jail.

Fronted by Christopher Nimbley, 37, of Wordsworth Street, Liverpool, the ‘Carlos’ gang smuggled heroin and crack cocaine into the town from the Merseyside area.

Six people appeared at Preston Crown Court yesterday (Tuesday 1 May) where they were sentenced following a complex investigation.

Amongst them was Nimbley and his ‘lieutenants’ Jeffrey Dillon, 24 of Inglewhite, Skelmersdale and Bradley Dillon, 20, of Lea Crescent, Ormskirk – who were also sentenced following their conviction for the rape of a vulnerable woman. They received the most significant sentences, totalling 85 years.

The operation which cracked the gang - codenamed Operation Lawson – began in November 2016 and quickly established that OCG boss Nimbley, who pleaded guilty at an earlier hearing to conspiracy to supply Class A drugs, was running a mobile phone which drug users would call to then be directed to another number for a street dealer.

Undercover surveillance showed that the Dillons were both using the dealer number before any hand to hand drug exchanges took place.

The arrest of a local drug user in January 2017 seemed to force Nimbley to move back to Liverpool and leave the Dillon brothers in charge of the Blackpool operation.

Detectives overseeing the operation soon learned that more people were involved and that with Nimbley’s relocation, the drugs gang was operating on more of a ‘county lines’ model using vulnerable people to work as runners, delivering drugs and money, coordinated through a phone relay system. ‘Lines’ refers to the mobile phone numbers the gangs use to sell drugs. On Friday 3 February 2017 drugs warrants were executed at a flat on Clevedon Road, Blackpool where Jeffrey Dillon, Bradley Dillon, and James Rothwell, 28, of  Hallcroft, Skelmersdale  were arrested for conspiracy to supply Class A drugs. Numerous phones were seized as well as digital scales and a small amount of cannabis and spice. The scales were later found to contain traces of cocaine, heroin and cannabis.

James Rothwell was yesterday jailed for five years and six months for conspiracy to supply Class A drugs.

A further drugs warrant was then conducted at a flat on Derby Road where mobile phones were seized along with plastic bags consistent with the supply of Class A drugs. The packaging was later found to contain traces of cocaine. A warrant was also executed at a flat on Mill Street, Toxteth, Liverpool where gang boss Nimbley was living. He was not present at the address but documentation and identification was seized that linked him to the premises.

Items recovered from the flat were forensically examined which were confirmed to have Christopher Nimbley’s fingerprints on. Also seized from the premises was a large amount of loose brown powder – 14 grams of 29% purity heroin - and two large white crack cocaine rocks valued at around £10,000. The haul also contained scales, packaging, tick lists, mobile phones and a chopping board which contained scratch marks and was covered in small chips of white rock, consistent with producing crack cocaine. Other arrests and seizures followed in the following days.

The investigation uncovered that Mark Ansell, 42, of Lindbeck Drive, Blackpool would drive Nimbley to Toxteth in Liverpool at least three times a week to collect drugs. Yesterday Ansell was jailed for four years for conspiracy to supply Class A drugs.

Also sentenced was Kerry Smith, 30, of Cunliffe Road, Blackpool. She was given a four year and two week prison term for conspiracy to supply Class A drugs for her role in dealing the drugs.

Christopher Nimbley remained outstanding but following a media appeal on Tuesday 5 September 2017, he was located and arrested at an address in Liverpool. Also found at the premises was a suitcase containing over £2,000 as well as digital scales.

The complex investigation run by Lancashire Constabulary led to the recovery of evidence that revealed the principal members of the crime gang – Nimbley, Jeffrey Dillon and Bradley Dillon - were not just involved in the supply of heroin and cocaine.

A number of mobile telephones had been seized and were submitted for forensic examination. Mobile phone evidence obtained from the seize revealed a woman, who appeared to be unresponsive throughout and was clearly intoxicated, had been sexually assaulted and raped.

Detectives later identified the woman, who had not consented to the sexual activity, and had no recollection of the incident.

Nimbley has been sentenced to seven years for conspiracy to supply Class A drugs, 25 years for rape with an extended five year licence and five years for sexual assault.

Bradley Dillon was sentenced to three years for conspiracy to supply Class A drugs, 14 years for rape and five years for sexual assault.

Jeffrey Dillon was handed four years for conspiracy to supply Class A drugs and 22 years with a five year extended licence for rape.

Nimbley and the Dillon brothers will serve their sentences concurrently.

DCI Rebecca Smith, of Blackpool Police, said: “I am happy with the significant sentences issued and the result should send a clear message to other criminal gangs engaging in similar activity that this will not be tolerated.

“This type of criminal activity is very sophisticated and takes a lot of time to investigate and bring to court but we continue to work tirelessly to dismantle such groups as the Carlos gang and make our streets safer places to be and live.

“Nimbley and his associates were prolific in the resort – flooding the seaside town with illicit drugs.

“Through our investigation we also identified that Nimbley and the Dillon brothers had brutally raped a vulnerable woman. These are dangerous men who have exploited their power, not only to facilitate illegal activities, but to violate an innocent woman, causing extreme physical and emotional harm. Their acts are truly despicable and I hope that the result today can bring her some justice and allow her to move forward.

“We are committed to tackling all those who deal drugs in our communities, including ‘county lines’ activity. Working together with both our communities and police forces across the North West and beyond, including the regional serious organised crime unit, Titan, we are actively targeting and disrupting these gangs. It is not acceptable that gang leaders are getting rich out of someone else’s misery.  We remain committed to disrupting such activity and where clear evidence exists, offenders will be put before the courts and brought to justice, as has been the case here.”