A MAN has been jailed for possessing an illegal firearm. 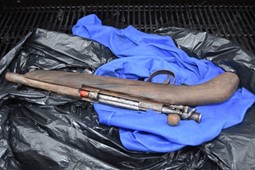 Smith, of the Oaks, Meadow Street, Great Harwood was jailed for a term of 5 years after pleading guilty to the charge at Burnley Crown Court yesterday (Monday, November 19th)

His wife Mary Smith, also 41, had the charges against her dropped.

The court heard that Smith secured the firearm following an incident of disorder at an organised boxing event in Penrith in June last year at which he was present.

The firearm was subsequently recovered from Smith’s property in Great Harwood.

Detective Inspector Vinny De Curtis, of East CID, said:  “We have worked hard to secure this conviction gathering evidence from other regional police forces to establish the motive and intent for possessing this shotgun and securing this guilty plea.

“I welcome this sentence which reflects the gravity of the offence.”