We are appealing for help tracing a man who is wanted for failing to attend court.

Gintaras Vitkauskas, 25, from Nelson, was due to appear at Preston Crown Court on 19th March accused of theft from a motor vehicle and possession of an offensive weapon.

He is also wanted after failing to attend Burnley Magistrates’ court on 4th April in relation to an allegation of driving whilst disqualified.

Police have been making a number of enquiries to trace him.

Vitkauskas is described as being 5ft 10in tall of average build. He has dark hair, blue eyes and wears glasses. He has a tattoo of a lightning bolt on his left arm.

PS Duncan Hall said: “Vitkauskas is wanted after failing to attend court on two occasions. If you have seen him, or have any information about where he could be, please get in touch with us.”

Anyone with information should email [email protected] or call 101 quoting log number 91 of 13th February. 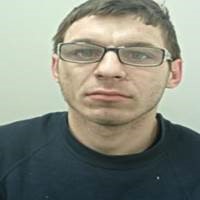