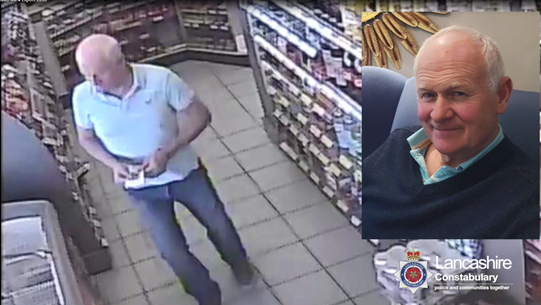 Police investigating a serious assault in Mawdesley have released CCTV footage in a fresh bid for information about the whereabouts of a man they want to speak to.

Police were called by the Ambulance Service around 5.45pm on Wednesday (October 10th) to reports a woman was being treated for stab injuries.

Officers attended an address on Moody Lane and a 50-year-old woman was found with several wounds to her abdomen area. She was taken to hospital by air ambulance where she was treated for serious injuries.

Following enquiries police have established the victim was assaulted in her car outside an address on Moody Lane. The car was then set on fire with her in it, but fortunately she managed to escape.

We have released footage (below) which shows the extent of the fire.

We also continue to investigate claims petrol was thrown at a 15 year old girl. She was not physically harmed.

Detectives are appealing again for information about the whereabouts of John Cowley, the victim’s husband (pictured) who they want to speak to in connection with the incident.

The second CCTV clip below is from the 10th October at Morrisons in Southport. It shows John wearing the clothing he was last seen in - a light blue polo shirt and dark blue jeans.

Detective Inspector Steve Monk, of Lancashire Police, said: “We’ve been trying to trace John Cowley for a week now. We want to speak to him in connection with these very serious offences and would urge anyone with any information at all, to get in touch with us immediately.

“I appreciate that the CCTV footage of the car is quite shocking but I would like to reiterate that we are treating this as a targeted attack and don’t believe there is any significant on-going risk to the wider public.

“We have a dedicated team of officers working on this case but we need your help. If you have seen John Cowley, or a man matching his description please do not approach him, but speak to the police.

“John - if you are reading this, please attend the nearest police station.”

Anyone with information can contact police on 101 quoting log 1091 of October 10 or in an emergency or for an immediate sighting call 999.