A man who posed as a bank employee to defraud an elderly couple suffering dementia, out of their Preston home and life savings has today (Monday, 10th September) been jailed.

Syed Bukhari (pictured below), 38, from Deepdale Avenue, Withington, Manchester was sentenced to eight years and four months imprisonment at Sessions House in Preston after previously pleading guilty to fraud offences at an earlier hearing. Due to his guilty plea, the sentence was reduced to seven years and 11 months.

An investigation was launched in January this year after it was discovered a house belonging to the married elderly couple had been sold without their knowledge. Enquiries also revealed that numerous bank accounts and credit cards had been taken out in their name. Bukhari had withdrawn from their existing accounts and stole in excess of £150,000 of their life savings whilst purporting to be their son or a bank employee helping the pair.

His activities began around November 2017 when the couple, the wife, 81, and the husband aged 80, were contacted by a male under the guise of ‘Gerry Patel’ from their bank. He told them that he had resolved fraudulent transactions on their accounts and their house was at risk of repossession but he would help them. He used this to befriend them and gain their trust. He later went as far as befriending their son over the phone, convincing him he was acting on behalf of the bank.

On November 16th, the couple’s bank manager made contact with them, suspicious that a £40,000 online loan application had been made in the husband’s name. Neither of the pair could provide an explanation as they had not made the application. Fortunately the loan application was cancelled.

The following day, a man – purporting to be the couple’s son – contacted the bank complaining that that his ‘father’ had been contacted. A few days later the male victim attended the bank with a letter which stated that if he was in the bank and appeared confused, their son, who should have authority on the account, be contacted. There was no authority on the account and this was a bid to gain control of the account.  It provided a contact number for the ‘son’ – which was used by Bukhari - and also stated that all transactions on his account were genuine and requested the credit limit should be increased to £10,000.

Later that month, the couple were visited by a PCSO and a financial investigator after concerns were raised relating to unusual financial activity. The wife, having been totally convinced that she was receiving genuine help by Bukhari ,declined any police assistance, stating that none of their money was missing and that an Asian man, believed to be Bukhari, from their bank had been helping them. The financial investigator visited the couple’s bank who confirmed that someone had been to see the couple but it was later revealed that this was a legitimate visit and was not the same person the wife had referred to.

Within weeks, 10 different bank accounts and credit cards in the victim’s names had been opened fraudulently via online applications. One of the accounts had almost £100,000 deposited into it, which was later found to be from savings and investments belonging to the couple. The bank froze the account after becoming suspicious and so unable to access the money, Bukhari then began making multiple calls to the bank claiming to be the son, questioning why the account was blocked stating his father would be attending the Blackpool branch to resolve the problem.

Later that day, the husband attended the bank with a note stating that it was evidence of where the money had come from and that the details should be sent to head office but he was confused as to why he was there with no knowledge of the account. Staff at the bank were so concerned about him, they helped him find his car and contacted the police.  They left the block on the account in place.

As a result, two PCSOs visited the couple’s home in Fulwood later that afternoon. Their door was answered by Bukhari, again using the name Gerry Patel, He was on the phone to the bank still trying to get the account unblocked. Confused, the wife told the PCSOs that Gerry was a friend of their son and that they were fine. “Gerry” said that the husband had probably been to the bank with his son. Later, the bank unblocked the account and all of the money was withdrawn or transferred.

It was established that the couple’s mail was also redirected which was stopped when the victim asked her postman why she hadn’t had any post. This gave Bukhari the opportunity to intercept any bank cards being delivered to the victims. With concerns being raised, the redirection was cancelled by Royal Mail. Days later attempts were made to redirect the mail again but Royal Mail security intercepted and once again cancelled it.

In addition, the couple’s landline phone had also been diverted to a line used by Bukhari and later, their telephone number was changed by the fraudster. All of this was to gain control of the victims’ existing accounts and intercept communication from the new accounts that had been set up.

On Monday 8th January, the couple’s real son contacted the police, concerned that his parents had been victims of fraud after seeing letters about various overdrafts they had not applied for.

Detectives started an investigation and it was revealed that the couple had been driven round various banks in Chorley, Blackburn and Manchester. New accounts had been opened, requests were made to reactivate frozen accounts or to transfer various sums of money between accounts, all the while believing that “Gerry from the bank” was helping them from losing their home

It was also found that their house - where they had lived for 40 years - had been sold on December 21st to a private company without their knowledge for less than the market value.

Bukhari was identified as a suspect and officers discovered he had made six trips to Dubai and Pakistan in three months often travelling in first and business class. On one occasion spent almost £11,000 on a hotel stay in Dubai.

He was traced there and arrested on his return to the UK on Sunday 11th February. Lancashire officers met Bukhari from his business class seat on an Emirates flight at Manchester Airport. During his trips, Bukhari had spent tens of thousands of pounds on Rolex watches, jewellery, designer clothes, bags, phones and a cosmetic procedure to have a wig fitted.

When arrested he was found to be in possession of the couple’s identity documents and documentation relating to them and the fraudulent accounts..

Speaking after the sentencing DS Janette Bashall from Lancashire’s Economic Crime Unit said: “Bukhari is a callous, deeply manipulative and heartless liar who saw fit to take over the lives of an innocent, vulnerable elderly couple. They had worked hard all their lives to be able to retire in some comfort yet he saw to destroy this by taking their home and hard earned savings, defrauding them of in excess of £350,000, most of which has been spent and not recovered. He racked up thousands of pounds of debt whilst travelling extensively on luxury trips to Dubai and Pakistan.

“It is particularly callous that he took full advantage of the pair, exploiting their vulnerability and lack of capacity due to their dementia. In fact, I am convinced he saw this as an opportunity to further his criminal behaviour.

“This has had a significant impact upon the couple’s health to the extent they cannot live as independently as they previously have. The extent of the daily contact that the fraudster had with this couple has led to them being so confused that to this day they still believe they were being helped by a genuine bank employee.

“The family are continuing to try to get back the house that he manipulated the couple in to signing to sell. They didn’t even know it had been sold and did not have the capacity to make that decision. Furthermore, the genuine purchaser of the house will be at a significant loss if it is returned to the rightful owners.

“We believe that Bukhari was the instigator in this fraud but he did not act alone. The investigation will continue to identify further offenders and an application under the Proceeds of Crime Act has been made to seize assets from him. We are still determined to identify those involved and so if you think you know who they may be, please contact us.

For advice on how to spot the signs and how to avoid becoming a victim of fraud, please visit Action Fraud’s website at actionfraud.police.uk 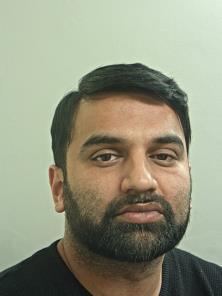