THE search for missing Huncoat woman Lindsay Birbeck is continuing – more than a week after she disappeared.

Lindsay, 47, a teacher has been missing since last Monday (12 August) and extensive searches have been going on in an area known as The Coppice and further beyond in Huncoat Quarry and elsewhere.

CCTV footage shows Lindsay at 4:06pm on Monday (August 12) on Burnley Road walking in the general direction of Accrington. 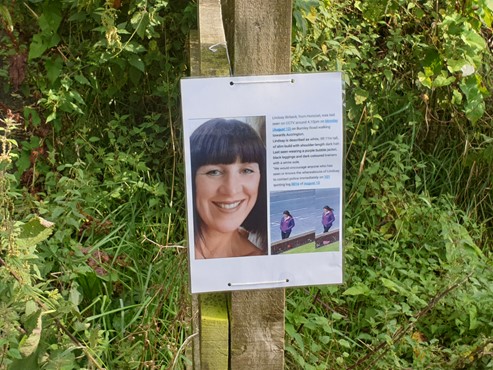 An earlier suggestion that a witness had seen Lindsay in Peel Park Avenue later that afternoon have now been ruled out entirely following further investigation. This information was a genuine mistake by a witness trying their very best to help.

A number of specialist resources including dogs, Mounted, police, mountain and underwater rescue search teams, Lancashire Fire and Rescue Service and drones continue to look for Lindsay. Officers have also been handing out leaflets and speaking to members of the public in the area.

We remain keen to speak to any dog walkers in the area who have not yet spoken to the police or anyone who was in the Burnley Rd area around 4pm on the 12th and may have dashcam footage.

Detective Inspector Tim McDermott, of Blackburn Police, said: “Lindsay has now been missing for ten days and as time goes on without any contact our concern for her grows, as of course does her family’s.

“While we have now ruled out the sighting on Peel Park Avenue we do still believe that Lindsay’s most likely route after she was spotted on CCTV is towards The Coppice and that area remains the focus of our search.

“I would like once again to thank the community for their support but still urge them to take care if they decide to go out and search. Some of the areas are treacherous and while our search teams are equipped and trained to explore such areas we would urge members of the public to stick to public footpaths and main roads only. We understand you want to help, but your safety has to be our priority.

“I’d also remind the public that if you come across something you think may be significant to the investigation, please don’t touch it but report it to us or flag down a nearby officer.

“This remains a missing person enquiry and there is still no evidence that Lindsay has been the victim of crime. I would reassure the community that we will continue to approach the investigation thoroughly and with an open mind. There also remains a very significant and dedicated investigation team working with the search teams to find Lindsay.”

Lindsay has links to Accrington and Burnley, as well as Kendal in Cumbria.