Detectives are appealing for information after three people were shot in Skelmersdale.

Police were called to an address on Belfield at about 1.30pm today (Tuesday, October 15th) following the report that shots had been fired.

Officers attended and three men aged 46, 45 and 21 were treated for gunshot wounds.

An investigation is underway and police are appealing for information.

Chief Inspector Ian Jones, of Skelmersdale Police said: “We’re in the very early stages of an investigation and I would appeal to anyone who saw or heard anything or who has information which could assist to get in touch.

“I know that this will have caused a lot of fear in the local community but would like to reassure people that this incident was not directed at the general public and appears to be a targeted attack.

“We have additional police officers on Belfield and in the wider Digmoor and Skelmersdale area who will be carrying out high visibility patrols, along with extra specialist resources including armed officers. These officers are there for reassurance and we’d urge you to speak to them if you have any questions, concerns or information.

“This level of serious violence is completely unacceptable and we will do all we can to find those responsible."

A Section 60 order is in place tonight as a direct result of today’s incident. The order covers the areas shown in the map below and is in place from 5pm today until 5am tomorrow morning (16 October). The powers allow us to search people and vehicles without suspicion. They are used to prevent crime and disorder, and keep local people safe and feeling safe. 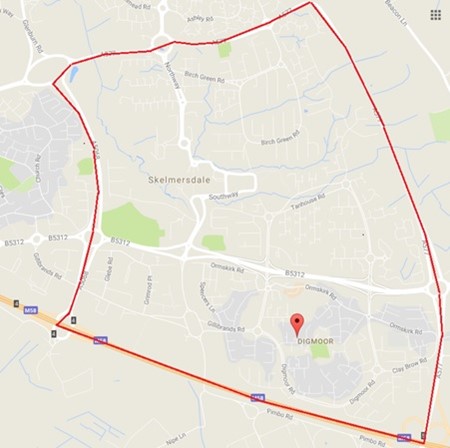 Anyone with information about should call police on 101 quoting log 0622 of October 15th or independent charity Crimestoppers on 0800 555 111.