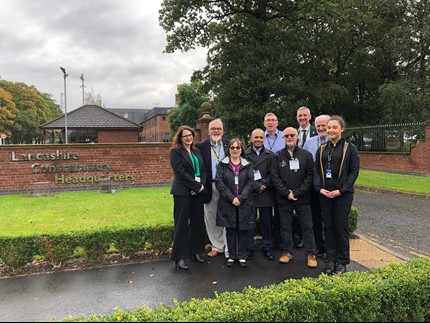 A team of Lancashire Police volunteers who have delivered internet safety training to thousands of people have been shortlisted for a prestigious award.

The force’s 20 Cyber Volunteers (some pictured) have been nominated for a Lord Ferrers Award, which honours those who provide an outstanding contribution to policing through volunteer work.

The awards ceremony will be held tomorrow (Tuesday) in London.

In the 18 months since the team was set up, the Cyber Volunteers have delivered online safety training to 17,000 people across Lancashire.

The team have delivered training to people from all walks of life, with word of mouth recommendations resulting in requests from schools, colleges, universities, businesses, community and faith groups, groups for older people as well as clubs such as Scouts and Guides.

As a result, around 2,000 hours of safety training has been delivered without any cost to the Constabulary, freeing up police officers to investigate crimes and provide a visible presence on the streets.

The team was nominated for the award by Louisa Murphy, who works in the Lancashire Police Cyber Crime Unit and oversees the volunteers.

She said: “Volunteering is a hugely selfless act and anybody who gives their time in this way deserves recognition.

“However the Cyber Volunteers have gone completely above and beyond. They have given the tools for staying safe online to thousands and thousands of people and the positive impact of this cannot be overstated.

“They have given their time whenever they have been needed, educating schoolchildren as young as five, as well as visiting business and attending meetings of other groups and organisations.

“I’m so proud of them and so pleased they’ve been shortlisted for the award.”

The awards are run by the government Home Office. There are several categories and the Cyber Volunteers have been nominated for the ‘Police Support Volunteer’ team award.

The volunteers, aged between 20 and 70, have all been nominated, and the five longest-serving volunteers will attend the awards ceremony tomorrow (October 15th).

Lancashire’s Police and Crime Commissioner, Clive Grunshaw, said: "I am delighted that our cyber volunteers have rightly been recognised for the fantastic work they do across the whole of Lancashire, supporting businesses and individuals to stay safe online.

"They are also a vital part of ensuring my ‘Be Cyber Wise’ campaign reaches those who are most vulnerable to being targeted by online criminals and help them spot scams before they become victims."