Police are appealing for help to trace a man missing from Blackburn.

Daniel Gillespie, 35, was last seen at shortly after 6am today (Sunday, April 26th) at an address on Pleasington Close in Blackburn.

He is described as white, slim, 5ft 7ins, light brown short hair. He was last seen wearing khaki trousers and a red top. 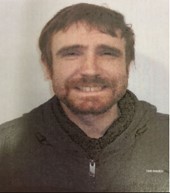 Daniel is originally from the Hyde area of Manchester.

Police are warning members of the public not to approach Daniel as he can become violent. Any sightings should be reported to police as soon as possible.

PC Karl Dixon, of East police, said: “We are worried about Daniel because he is very unwell and needs returning to a place of safety.

“I would appeal to anyone who sees him or knows where he is to contact us as soon as they can.”

Anyone with information should contact police on 101 quoting log 0289 of April 26th. For immediate sightings please call 999.