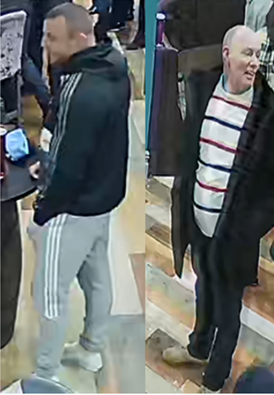 Do you recognise these men? We need to speak to them after a large-scale fight between Burnley FC and Newcastle United fans at a pub in December.

It happened on Saturday 14th December, at around 4:25pm at the Turf Hotel on Yorkshire Street, Burnley.

Following an initial altercation between the rival groups of fans, some Newcastle supporters were ejected by door staff.

A short time later, a group of between 20 to 25 Newcastle supporters returned and a fight broke out, with pool cues, glasses and bar furniture used as weapons.

One man had to be treated at hospital for an eye injury.

PC Ross Bosdorff from Burnley Police said: “We know that the vast majority of football fans enjoy a bit of friendly rivalry and attend matches to have a good time, however, on this occasion, fans on both sides took it too far by fighting with each other.

“We need anyone who knows who was involved in the disorder, as well as the men pictured in the images, to make contact with us as soon as possible.”