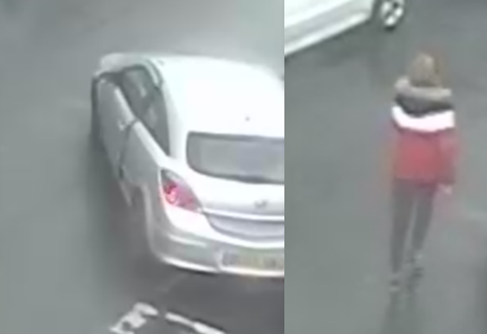 Officers have released CCTV footage as part of their investigation into a fail to stop collision in St Annes in December.

It happened at around 2:05pm on 12 December when a silver car, possibly a Vauxhall Astra, travelled from Trafalgar Street on to St Alban’s Road and collided with an 83-year-old woman who was crossing the road before leaving the scene.

Police have been making a number of enquiries and now want to identify the driver of the car in the picture.

We also believe a female passenger exited the vehicle and went to check on the casualty as the car drove off. Unfortunately she left prior to police arrival.

We are keen to identify the female in the distinctive jacket (pictured) as we believe she can help us establish what happened.

PC Chris Tierney of Lancashire Police’s Tactical Operations Division, said: “We continue to appeal for information and are keen to trace the driver of the pictured car. I would like to ask anyone who saw the incident gets in contact with us as soon as possible.”

“We’re also interested in speaking to the pictured female. We believe she was travelling as a passenger in the car at the time of the collision and could hold vital information. If this is you, please do the right thing and call us.”

Anyone with information can call 101 quoting incident 761 of December 12th.

Alternatively, independent charity Crimestoppers can be contacted anonymously on 0800 555 111.