Two men have been arrested after officers uncovered a sophisticated cannabis set-up with an estimated street value of up to £120,000 at a property in Burnley. 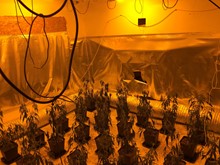 Acting on information from the community, police executed a search warrant at the address in Bank Parade at 8.30am today and found around 170 cannabis plants in three rooms at the property.

Two men – aged 21 and 22 and both of no fixed address – have been arrested on suspicion of cultivating cannabis. They are currently in custody.

As well as cannabis, officers also found drug paraphernalia, extractor fans and evidence the electricity meter had been by-passed. There was also evidence of previous cannabis harvests and that people had been living and sleeping in the building.

Present at the raid were officers from the Burnley Neighbourhood Policing Team, including Neighbourhood Task Force Officers, Response Officers and Tactical Operations Officers.

Sgt Phil Ellis, from the Burnley Neighbourhood Policing Team, said: “This significant cannabis discovery and subsequent arrests came as a result of information from the public. I hope today’s activity shows that Lancashire Constabulary is committed to tackling organised criminal activity and acting on information and concerns that we receive from the public.

"We cannot disrupt these groups without the help of the public. Cannabis cultivation is a serious issue affecting the whole community." 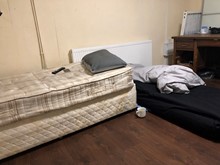 To report criminal activity in your area call 101 or report it online at https://doitonline.lancashire.police.uk/