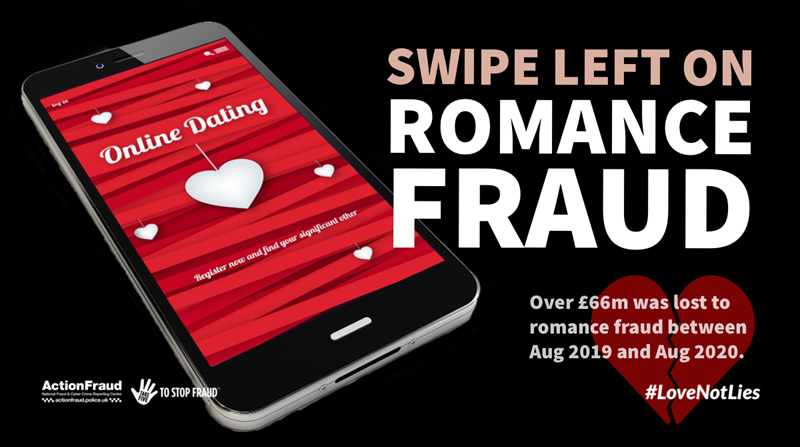 Internet daters are being urged to be vigilant after more than half a million pounds was reported stolen in the last year from Lancashire residents looking for love online.

Romance fraudsters create fake profiles on dating websites or social media sites and spend a number of weeks gaining their victim’s trust, before requesting money from them.

There were 84 reports of romance fraud in Lancashire from April 2019 until the same time this year, up from 68 and 66 cases from the previous two years.

In the last financial year, a total of £549,374 was reported to have been stolen from victims of romance fraud in Lancashire. In the UK the total loss reached £66m.

Police forces across the country are now working together with partners to tackle romance fraud with the launch of the #LoveNotLies campaign, running throughout October.

The multi-agency campaign aims to raise awareness of this type of crime while providing clear and unambiguous protection advice on how to avoid falling victim to a scam.

Research shows that around sixty percent of victims are women with an average age of 50, however there are reports of romance fraud from both men and women of all ages.

Typically, offenders will say that they are working overseas, either in the armed forces or in medicine, using this as a reason why they cannot meet in person. There is also often a mention of America, Nigeria or Ghana as places they travel to.

Invariably they plan to meet with their victims for the first time and then an emergency will take them away. The meeting will then be unable to go ahead, before the offenders claim to be in some sort of financial crisis and the requests for money begin.

Nationally there has been a 26 percent increase in reports to Action Fraud in the last year. This rise has been linked to the Coronavirus lockdown period which saw more people spending time at home and online.

As a crime that poses significant risk to the emotional and financial wellbeing of its victims, romance fraud is dealt with as a priority by the National Fraud Intelligence Bureau. Victim care is also prioritised by the National Economic Crime Victim Care Unit.

“Romance fraud, or dating fraud as it’s also known, is an incredibly sophisticated crime, which has devastating impacts on victims, both financially and emotionally.

“It is a crime that we are committed to tackling with help from key partners and we want to empower people to understand what to look out for to protect themselves and their money online.

“Victims often blame themselves but these criminals are experts at impersonating people. If anyone thinks they may have met someone online, that they suspect isn’t genuine, they should speak to their family and friends and most importantly report it immediately.”

For advice on how to spot the signs and how to avoid becoming a victim of fraud, please visit Action Fraud’s website at: actionfraud.police.uk.