Do you know these individuals who are wanted from East Lancashire?

Do you recognise these faces? They are both wanted by police in East Lancashire?

On July 5th we launched Operation Hunter which targets some of the county’s most wanted individuals.

In the first seven days we arrested 40 wanted people including a 24-year-old man from Blackburn wanted in connection with being concerned in the production of a controlled drug and a 29-year-old man from Rishton wanted after failing to attend court.

Now we need your help to find others trying to evade capture.

These are the top five wanted faces in East Lancashire – do you know where they are? 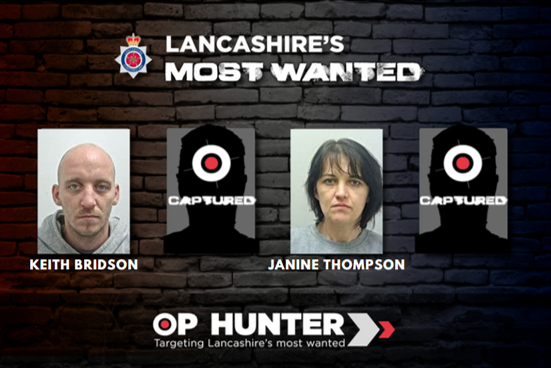 Wanted on warrant after failing to appear at Wirral Magistrates Court last month.

The 40-year-old is wanted on warrant in connection with possession with intent to supply drugs.

Thompson, previously of Blackburn Road, Accrington is described as being 5ft 4in tall, with dark hair.

Anybody who sees her, or has information about where she may be, is asked to email [email protected] or call 101.

The 30-year-old is wanted after failing to appear at court in connection with an attempted burglary.

Bridson, previously of Accrington Road Burnley is described as around 5ft 10in tall, of slim build with receding hair.

Anybody who sees him, or has information about where he may be, is asked to email [email protected] or call 101.