Wanted man Kian Lowe from Preston has been arrested following our appeals to locate him.

The 19-year-old, who was wanted in connection with a robbery, handed himself in this morning and is currently in custody.

He was arrested as part of Operation Hunter which targets the county’s wanted individuals.

And last month Adam Bhamji, who had been wanted on recall to prison since last year, was arrested on the M5 motorway in West Mercia as part of Operation Hunter.

Bhamji, 38, from Farrington Moss, has now been returned to prison where he will serve the remainder of his 10 year sentence for aggravated burglary.

That's four down, one to go of our top five most wanted people in South Lancashire.

Since the operation was launched earlier this month, we have made more than 70 arrests in South division and we now need your help to find others trying to evade capture.

These are the top most wanted faces in South Lancashire – do you know where they are?

Please quote log number 0529 of July 20th for any sightings. 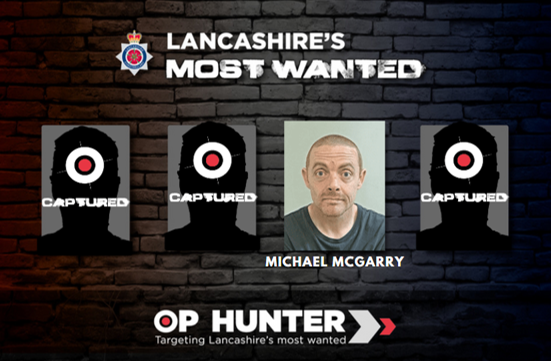 Anybody who sees him, or has information about where he may be, is asked to email [email protected] or call 101.