New rural task force teams have been set up across Lancashire to target the issues that matter most to rural communities including machinery theft, rural, wildlife and heritage crime.

A total of 20 officers have been funded through the police officer uplift programme. The teams will form part of the local policing teams that already cover the rural communities and will based at Morecambe, Garstang, Ormskirk, Clitheroe and Waterfoot.

The new officers are intended to provide extra resources to target, disrupt and address crime in rural communities.

The launch follows the investment in 40 task force officers located in the county’s towns and cities last year.

“Last year we established taskforces in our more urban areas and they have been effective in targeting those issues and people who cause the most harm to our communities. This brings that model out to our rural areas.

“With 74 per cent of Lancashire classed as rural, these officers will be a great asset in preventing crime and supporting our rural communities, who have diverse needs.

“Talking to the residents in rural areas is key to the success of these teams. We will be asking our communities to tell us what their issues and concerns are so we can actively work to address them.” 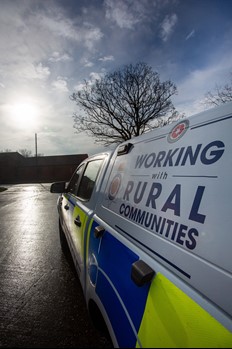 Clive Grunshaw, Lancashire's Police and Crime Commissioner, added: "Protecting our rural communities is as much a priority for me as it is policing our more urban towns and cities. They further support my commitment to making sure the public see genuine improvements to local policing and increased officer numbers as we invest back into the force.

"We all want to see more officers out on our streets, tackling crime and supporting all our communities. That is why I continue to lobby Government for fairer long-term funding that puts the officers we have lost since 2010 back into Lancashire, instead still being hundreds of officers worse off whilst other areas benefit.

"These five teams are trained to help tackle the unique issues faced in more rural areas and build safer rural communities, by working closely with the people who live and work in them. The force has been rated as outstanding in terms of our efficient use of the resources we have so, residents can be confident we will continue to deliver the highest quality policing service possible."

The new teams will go live from Monday 1 March.

The local community can provide feedback about the issues that matter most to them by completing the survey at stayintheknow.co.uk/lancashiretalking.