Detectives are appealing for information following a robbery at a convenience store in Accrington yesterday (May 4). 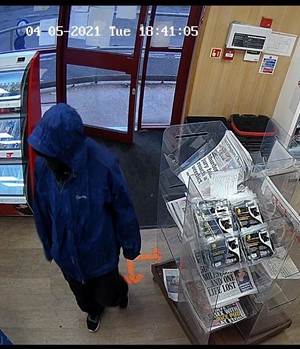 At 6.34pm officers were contacted to say a hooded man had just threatened staff at the Bargain Booze in Whalley Road with a screwdriver before escaping with a quantity of cash.

The man had earlier been seen hanging around outside the store.

He waited until the store was empty, before going in and pressing the buzzer to alert both female members of staff of his presence.

He distracted one of the store workers by asking her to pass him a bottle of wine from the wine display and then went behind the counter.

He then ushered her towards the till, threatening her with the screwdriver. The store worker shouted for help from her colleague and the man responded by making threats to both women to open the ATM and till.

Unable to access the ATM he emptied the till of cash and put it into a carrier bag, which he had brought with him.

One of the store worker has then managed to press the panic alarm.

The man then tried to escape but found the door was locked. At that point he grabbed one of the store workers and dragged her towards the door, threatening her with the screwdriver. 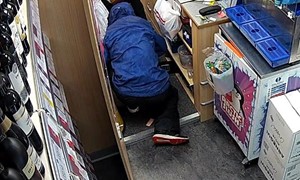 Her colleague opened the door and the suspect ran onto Pilot Street and then towards Whittaker Street.

A male customer was believed to be attempting to enter the store as the man was leaving.

The suspect is initially described as white, with a scruffy dark beard, which had some ginger in it. He was wearing a blue jacket, dark bottoms and a scarf that was covering some of his face.

No arrest has been made at this stage and enquiries are ongoing.

One of the victims suffered bruising to her hand and arm, but both were left extremely shaken.

Det Insp John McNamara, from East CID, said: “This was a shocking and appalling crime, which has left the victims extremely shaken.

“We understand it will cause the public a great deal of concern and we have increased patrols in the area.

“Although we are in the early stages of our investigation, we are carrying out a number of enquiries to find the individual responsible. As part of those enquiries, we are asking for the public’s help in identifying the man in the CCTV.

“We would be keen to speak with the male customer who attended as the offender was leaving and also want to hear from anybody with CCTV or dashcam footage from the area at that time, which could assist our investigation.”

Anyone with information is asked to call 101, quoting log 1239 of May 4, 2021 or report it online via Home - Lancashire Constabulary - Report Online. Alternatively contact independent charity Crimestoppers on 0800 555111.