Detectives investigating scams across Lancashire involving vulnerable victims being conned out of thousands of pounds by people falsely claiming to be police officers have made three arrests. 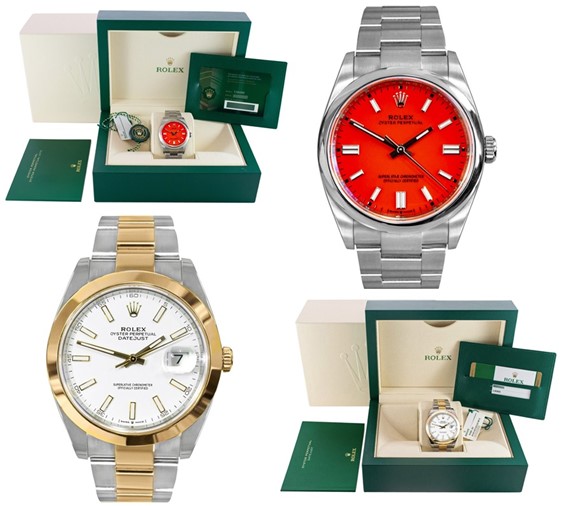 It comes as officers continue to warn people to be vigilant after two victims in the East of the county were tricked into buying and then handing over expensive Rolex watches, having cruelly been tricked into thinking they were helping police investigate fraud.

The first incident saw a man in his 50s from Darwen conned into buying a £9,750 Rolex watch (pictured with white face) from a store in Blackburn. The fraudsters, who falsely claimed to be from The Met Police, had told him that they suspected the shop of selling fake Rolex watches and that needed him to help with their investigation. The man bought the watch last Monday (October 4) and a courier came to collect it later the same day as ‘evidence’.

The fraudsters also attempted to defraud the victim’s mother, who is in her 80s, asking her to withdraw £8,000 as part of their investigation into bank fraud. They also told her there had been fraud on her bank card and to call 101. After she had put down the receiver, they remained on the line in a further attempt to convince her she was talking to the police.

The second incident saw a woman in her 60s from Blackburn conned into buying a £8,500 Rolex watch (pictured with red face) from the same store as the other victim. Having been told she was assisting a Lancashire Police fraud investigation, the victim purchased the watch on Friday (October 8), and a courier collected it later in the evening.

The fraudsters had earlier attempted to get the victim to withdraw £5,000 from her bank account and had also told her that there had been fraudulent activity on her bank card at Asda. That was an attempt to obtain her credit card information.

Det Sgt Steve Craig, of Lancashire Police, said: “These fraudsters have no morals and will use multiple tactics in a bid to con victims into either handing over money, their bank details or in these cases valuable watches. Scammers target elderly and vulnerable people so please make your loved ones aware.

“It is important to stress that genuine police officers will never ask for your bank details, money or for you to help with investigations in this way. If you get a phone call from someone saying they are from the police or the bank do not provide your account details or hand over any cash. If you are ever unsure about the identity of an officer, always call the police on 101.

“I would like to appeal for local jewellers or pawn shop owners to get in contact if you are offered either of the two Rolex watches pictured for sale. I would also ask that you remain vigilant for any elderly or vulnerable people who come into your stores and ask to buy an expensive watch. Although they might be making a genuine purchase, they could also be the victims of this kind of fraud.”

If anybody has any information which could help our investigation or you believe you or a loved may have been the victim of this scam please call police on 101.
For help and advice about how you can stay safe from scammers visit Action Fraud via https://www.fscs.org.uk/news/related/?topic=Action+Fraud&amp;amp;amp;page=1 or call 0300 123 2040.