£1.3m of counterfeit tobacco seized after van stopped in Blackburn 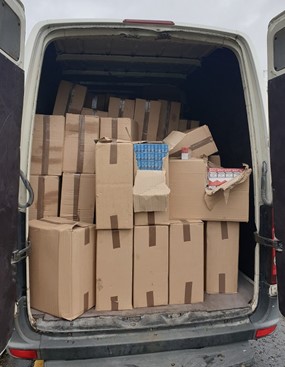 We have arrested three men and uncovered a stash of counterfeit cigarettes (pictured) thought to have a street value of around £1.3m.

At around 10.30am yesterday (Tuesday) roads policing officers on patrol in Blackburn received reports of suspicious activity on Peter Street, after a large group of men had been seen loading boxes of cigarettes into the back of a van.

A short time later officers stopped a Volkswagen Crafter van on the M65, close to junction four, while an Audi S3 was stopped on the A56 at Rising Bridge.

The vehicles were searched and in the van approximately 1.4 million counterfeit cigarettes and 75kg of hand-rolling tobacco were located. The items have an estimated street value of £1.3m and would have resulted in a loss of £600,000 in excise duty.

Trading Standards and HMRC were notified.

Sgt Pete Fyans, of the Lancashire Police TacOps team, said: “Counterfeit cigarettes are bad news on several levels, not least that they can pose a real danger to public health. Analysis carried out previously on seized counterfeit cigarettes has found them to contain ingredients such as arsenic, mould, insects, rat droppings, high levels of cancer-causing metals and even human faeces. We understand that a lot of people are struggling financially and buying cheap, illegal tobacco might seem like an easy way to save money, but it is not worth the risk.

“We hope this shows that we will not tolerate items like this being circulated on the streets of Lancashire and we will always act on information which disrupts the supply of counterfeit goods in the county.

“If you have any information about this type of activity, we would urge you to let us know.”

Anybody with information about the supply of counterfeit goods is asked to contact the Citizens Advice Bureau here www.citizensadvice.org.uk/consumer/get-more-help/if-you-need-more-help-about-a-consumer-issue/

Alternatively you can call us on 101, or contact independent charity Crimestoppers anonymously on 0800 555 111.