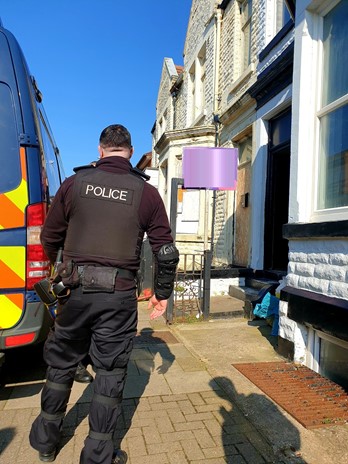 Between March 7 and March 13 Lancashire Police joined forces with police across the country as part of County Lines Intensification Week.

County Lines is the movement of illegal drugs from one area to another, usually by children or vulnerable people, who are coerced into criminal activity by gangs.

Activity in Lancashire included the execution of warrants, safeguarding of and visits to vulnerable people, as well as education visits to schoolchildren.

“The week’s activity was in conjunction with the national effort to target and disrupt those involved in organised crime.

“We are working harder than ever to crack down on County Lines criminals who bring drug dealing and violence into our communities.

“Their activity is associated with violence, drug dealing and the exploitation of children and vulnerable people, to move drugs and money. They will also seek to establish a base in target locations, typically taking over the homes of local vulnerable adults by force or coercion.”

Officers visited schools, giving advice on the signs to look for if a young or vulnerable person is being exploited or there is a change in their circumstances.

These changes include children having more clothes, mobile phones, or cash than normal, increased truancy, exclusion or frequently going missing.

Further visits were made to care homes, bus stations and train stations to raise awareness around County Lines, delivering messages and leaflets.

Officers also visited addresses concerned in cuckooing, where gangs take over a person's home and use the property to exploit the person who lives there, selling, making, or hiding drugs.

The visits were supported by partners, including local councils, with authorities able to use civil orders to deter people from frequenting vulnerable adults’ addresses.

During the week of action:

Det Supt Smith added: “Shutting down County Lines would not be possible without the support of partners as tackling County Lines is in equal parts about safeguarding victims, shutting down the line and targeting line holders

If you believe that someone maybe involved in County Line or other drugs activity, tell the police by calling 101 or call the independent charity Crimestoppers anonymously on 0800 555 111 or report your concerns anonymously online at crimestoppers-uk.org

If you think someone is in immediate danger, call 999.

For more information and details of the support agencies in Lancashire, please visit www.eyes-open.co.uk