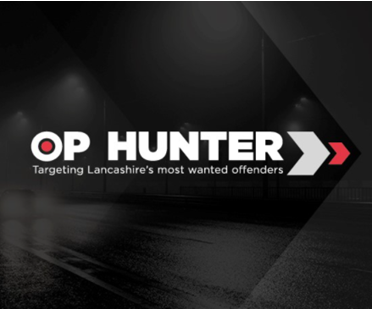 Lancashire Police are targeting some of the county’s most wanted offenders as part of an operation dedicated to finding those trying to evade capture.

The Operation, codenamed Hunter, runs from today, Tuesday 6th July, and will see taskforce officers from across the Force as well as specialist units including Tactical Operations and the ANPR intercept teams target individuals wanted for a range of offences including domestic abuse, sexual offences and general criminality.

Ch Insp Stephen Holgate, who is coordinating the Operation across the county, said:

“By using all our resources over the coming weeks, we will put a stop to those who think they can evade capture and show them that there’s always a place for them in our cells.

“We are committed to tackling crime to protect our communities and Operation Hunter sends a clear message to criminals that there will be no hiding place. For those who think they can evade the criminal justice system, they are wrong - it is only a matter of time before you are caught.”

Operation Hunter will be an ongoing strategy to target criminals who try to escape justice.

Andrew Snowden, Police and Crime Commissioner for Lancashire praised Operation Hunter as one of the ways the Constabulary protects local communities by cracking down on criminals:

“This type of action - cracking down on criminals - is exactly what we need here in Lancashire and I wholeheartedly support this operation. I will continue to work closely with the Constabulary to tackle crime, to target offenders and to bring them justice - law and order should always control our streets and never criminals."