The gang activity is highly associated with violence, drug dealing and exploitation; having a devastating impact on young people, vulnerable adults and local communities.

Gangs will use children, and vulnerable people, to move drugs and money, criminally exploiting them; they will also seek to establish a base in target locations, typically taking over the homes of local vulnerable adults by force or coercion – this is referred to as ‘cuckooing’.

People exploited in this way will quite often be exposed to physical, mental and sexual abuse, and in some instances will be trafficked to areas a long way from home as part of the network's drug dealing business.

As we have seen in child sexual exploitation, children often don't see themselves as victims or realise they have been groomed to get involved in criminality. So, it's important that we all play our part to understand county lines and speak out if we have concerns. 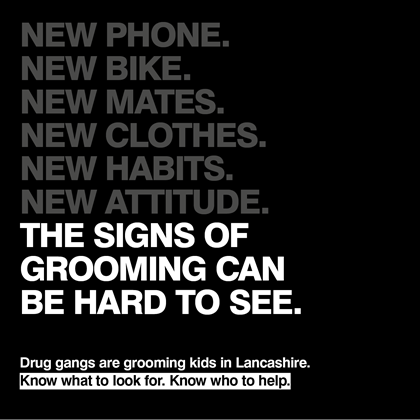 What are the signs?

The signs of grooming can be hard to see. Drug gangs are grooming kids in Lancashire. Know what to look for. Know who to help. The key thing to look for in a young or vulnerable person who maybe being exploited in this way is a change in behaviour or circumstances, including:

If you think there may be dealing or drugs activity happening at a property, the key things to look out for are

What to do if you have concerns?

The best advice is to trust your instincts. Even if someone isn't involved in County Lines drug dealing, they may be being exploited in some other way, so it's always worth speaking out.

If you believe that someone may be involved in a County Line or other drugs activity, tell us by calling 101 or call the independent charity Crimestoppers anonymously on 0800 555 111 or report your concerns anonymously online at crimestoppers-uk.org.
If you think someone is in immediate danger, dial 999.

If you are a young person who is worried about your, or a friends involvement in County Lines

A good option is to speak to an adult you trust and talk to them about your concerns.

You can also call Childline on 0800 1111. Childline is private and confidential service where you can talk to specially trained counsellors about anything that is worrying you.

Tackling County Lines, and the supply gangs responsible for high levels of violence, exploitation and abuse of vulnerable adults and children, is a priority for police forces and supporting agencies.

We work with the North West Regional Organised Crime Unit in our response to identifying victims and criminals and taking effective action where required.

Bringing together officers from the National Crime Agency, North West Regional Organised Crime Unit and our officers, we are part of the national multi-agency County Lines coordination centre that works to develop the national intelligence picture, prioritise action against the most serious offenders, and engage with partners across government, including in the health, welfare and education spheres, to tackle the wider issues.

What you need to know about child criminal exploitation

This guide has been produced for young people to help them understand and identify the signs of County Lines and criminal exploitation so they can be better prepared to keep themselves, and may even their friends, safe.

Throughout, you'll see different names for 'child criminal exploitation' and this is deliberate to help you remember that it doesn't matter what it's called, it amounts to the same thing.